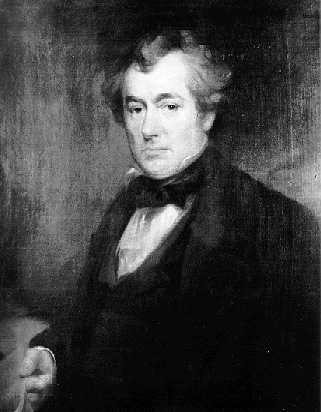 Robley Dunglison was born in Keswick in the English Lake District on 4th. of January 1798. His father was William Dunglison who worked in the wool trade in Keswick and his mother was Elizabeth Jackson, the granddaughter of the Rev. Isaac Robley, curate of St. John’s in the Vale in the parish of Crosthwaite.

His childhood was described in a local newspaper, following his death, as comfortable. His father, William, died at the age of 35 years.

Robley attended the prestigious Greenrow Academy at Abbey Holme near Wigton in Cumberland. 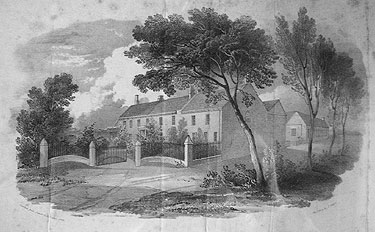 He was sent away to this boarding school at an early age and there is a letter written to his mother in 1803 from Brisco Hill, near Carlisle where he was spending what must have been his first school holidays with Mr. and Mrs. Scott of Brisco. The Scotts would most likely have been Isaac and Jane who were related to Robley, through Isaac Scott's mother who was Mary Robley, the Rev. Isaac Robley's sister. For one so young the letter shows considerable maturity of style.

It had been planned that young Robley would join his great uncle Joseph Robley who was a wealthy plantation owner and one time acting Governor of the island of Tobago in the West Indies. However these plans were upset when Joseph died in 1807. In his will, Joseph left three thousand pounds to his niece, Elizabeth, Robley’s mother, who was by then a widow which no doubt assisted her to continue Robley’s education.

In 1815, at the age of 17 years, Robley returned to Keswick where he began an active practice of medicine working with John Edmonson, a local surgeon.

In the four years leading to his 21st. Birthday he studied medicine in London, Paris and Edinburgh and qualified as an apothecary and surgeon. Tiring of work in general practice, five years later he traveled to Erlangan in Germany to take his degree of M.D.

On returning home to England in 1824 he was invited by the President of the United States of America, Thomas Jefferson, to take one of the Chairs in the newly formed Department of Medicine at the University of Virginia. Although only 26 years old, Robley had already attracted considerable favourable attention in his profession.

This attractive offer forced Robley to hurry a proposal of marriage to Harriette Leadam, the daughter of John Leadam, a London physician. Robley was quite pleased to be forced to rush his request as Harriette was a very popular girl and said to be ‘genteel, sensible and quite pretty!’ On the same day that Robley asked her father for approval, the Rev. Thomas Lee requested approval also. After lengthy discussions with the two men and listening to their offers, Robley was selected by Dr. Leadam as the best choice and the couple married exactly a week later on the 5th. of October 1824.

Three weeks later they were on their way to America but thanks to a combination of bad weather and poor navigation, the trip which normally took about four or five weeks took fourteen! Not that all their problems ended there. Their coach overturned and stuck in a creek, forcing them to ford the river, as there was no bridge. The remainder of their journey was completed on foot.

At the University in Charlottesville, Robley lectured in physiology, surgery, pharmacy and the history of medicine. 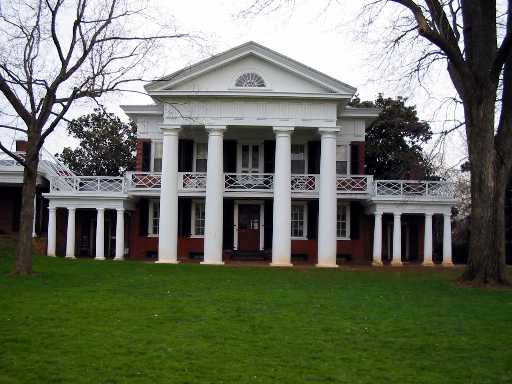 Robley Dunglison's home at the University of Virginia

During his time at Charlottesville Robley gained considerable reputation as a medical writer and, indeed, quite apart from his medical books he covered a wide range of most diverse subjects including fashion, prison discipline, road making, the Crusades, German poetry, Sanskrit and the canals of the ancients.

Shortly after his arrival in America, Robley was summoned by President Jefferson to be his personal physician and he was present at the President's deathbed in 1826. In all, Robley treated four Presidents including, Jackson, Madison and Monroe as well as John.P.Kennedy. 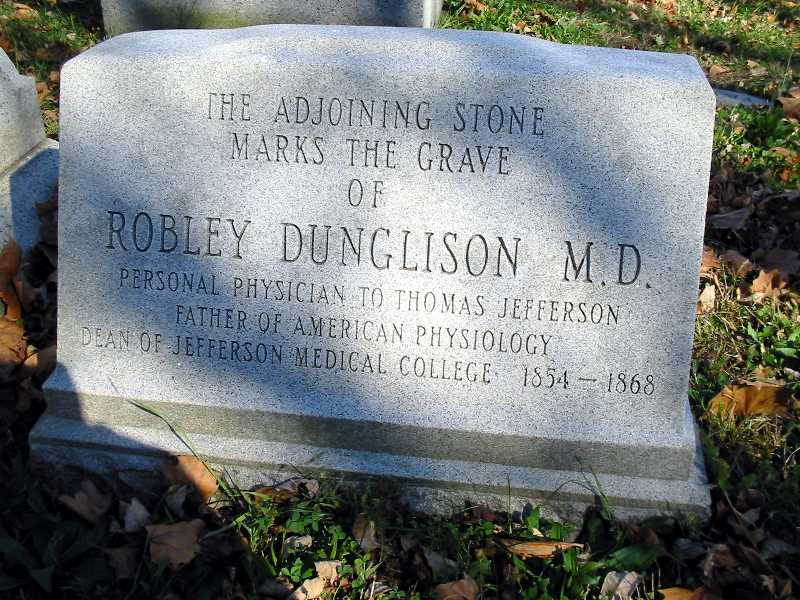 Robley was an early proponent of preventive medicine and noted that it is easy enough to prescribe, but not so easy to know what and when to prescribe!

A writer of the times commented on Robley, ' his great animation, his vivacity, his captivating manner, impressed the hearer with the conviction that he sat in the presence of an extraordinary man, decidedly the most popular teacher of physiology in America to-day.'

In 1832, he accepted the Chair in Medicine at the University of Maryland and moved with his family to Baltimore. In Baltimore two more sons were born to them, William Leadam on the17th. of July 1832 and Richard James on the 13th. of November 1834.

Three years later he moved again, this time to Philadelphia where he became the Professor of the Institutes of Medicine and Medical Jurisprudence at the Jefferson Medical College, a position that he held until declining health forced him to resign in 1868. While at J.M.C. he was generally hailed as ‘The Father of American Physiology’.

His last two children, Thomas Randolph and Emma Mary were born in Baltimore on the10th. of March 1837 and the 20th.of January 1840 respectively. Sadly, his eldest daughter, Harriette died in 1841 at the age of 16 from endopericarditis and was buried in the Laurel Hill Cemetery on the outskirts of Philadelphia.In 1853 his wife, Harriette contracted the same complaint and died on the 5th. of March 1853, she was buried with her daughter. Robley was devastated and by this time was suffering from ill health also, having gout and heart trouble. 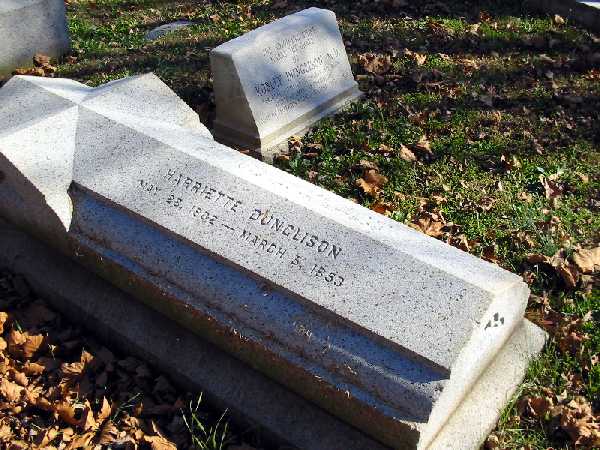 Following her death, Robley took a trip to Britain. On the 4th. of September 1854, the manifest of SS Pacific Star, outward bound from Liverpool for America, shows Prof. Robley Dunglison age 56 and Miss Dunglison age 50 among the passengers. It is most probable that Robley took the trip to Britain in order to escort his sister, Mary Elizabeth to join his family in Philadelphia.

Finally, Robley's failing health forced him to retire in 1859 and he took a trip to Britain to see both his mother, Elizabeth, in Keswick and his son, John Robley, who was practicing medicine in London. Sadly, he was to arrive too late as his mother died while he was on his way.

Following this visit, Robley returned to Philadelphia where he died in 1869. He is buried in the Laurel Hill Cemetery with his wife and daughter. 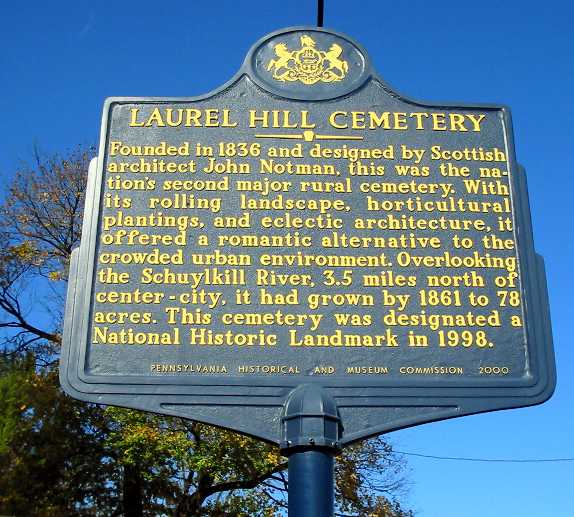 A newspaper in Cumberland reported that at his post mortem his brain was found to be 5 oz. heavier than the average English male. It was described as,' composed of the noblest material, arranged like the columns of a Corinthian dome in the most admirable proportions which could not have happened if the cerebral organs had not been cast in the finest mould'.

Samuel. D. Gross, his friend and an associate at Jefferson Medical College, remembered Robley in his Autobiography,' As a husband, father, brother, neighbour, friend there never was a kinder or better man. In all the relations of life he was a model. As a profound medical scholar, ages will probably elapse before the profession will have another Robley Dunglison'.

The use of the name ‘Robley’ as a Christian name continued in the family when Robley’s younger daughter married Commander John Browne of the Royal Navy in London. Their son, Surgeon Captain Robley Browne of the White Star Shipping Line saw Naval service during the ‘Boxer Rebellion in China and for a while served as Surgeon on the Royal Yacht. During the First World War he was Principle Medical Officer aboard the ‘Lion’, Admiral Beatty’s flagship.